In this, Part 2 of my series on slope stability & erosion control failures, I want to dissect another jobsite failure that one of our projects suffered through a couple of years ago. The conditions, failure mechanism and correction methods were similar to my first post (CLICK HERE), but the situation is worth presenting.

Embankments on either side of the new bridge were built and had to use 2:1 side slopes due to the tight ROW constraints for the rail corridor. The embankment was topped with CA-6 subballast that served as a base for subsequent railroad ballast and track installation. The sideslopes were capped with 6″ of topsoil, seeding and stabilization as final stabilization. 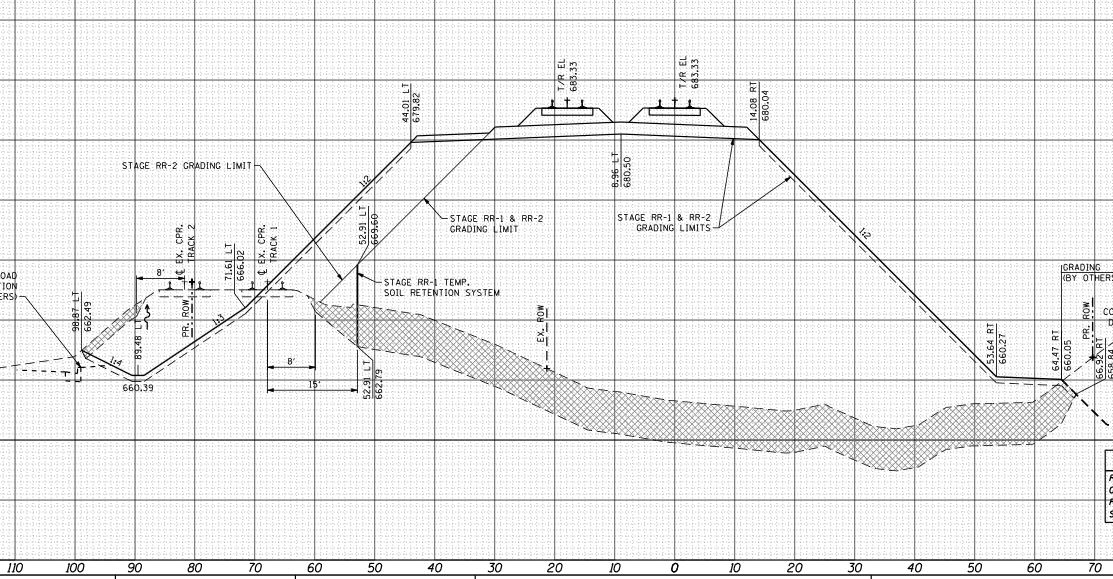 Mother strikes again. And she won. Twice. Let’s dig in.

The sideslope conditions were basically setup similar to the I-55 widening that we reviewed in my previous article. The CA-6, which is basically an impervious aggregate surface, did not have any sort of drainage channelization. The embankment & subballast were graded as a roadway crown, so unrestricted sheet-flow is directed to across the railbed to the embankment sideslopes. The uncontrolled flow would become our nemesis…

One subtle nuance to this site was its interim & final landscaping treatments. The Designers & IDOT’s Roadside Development group specified a slightly different stabilization design. Embankment slopes were temporarily stabilized using IDOT Mulch Method 4, which is a 2″ layer of compost stabilized with some sort of binder / additive to keep it in-place. This installation is specified to be applied “….using a pneumatic blower.” The Contractor had other ideas….

One of the Contractors building a portion of the embankment opted to install the mulch using his own forces instead of a landscaping subcontractor. The Contractor proposed, instead of using a blower, to grade the mulch using a bobcat, and then stabilize it with a hand-broadcast-applied polymer on the compost after it was installed. The Contractor’s PM told me that the polymer additive was recommended by his erosion control supplier and that it would work. 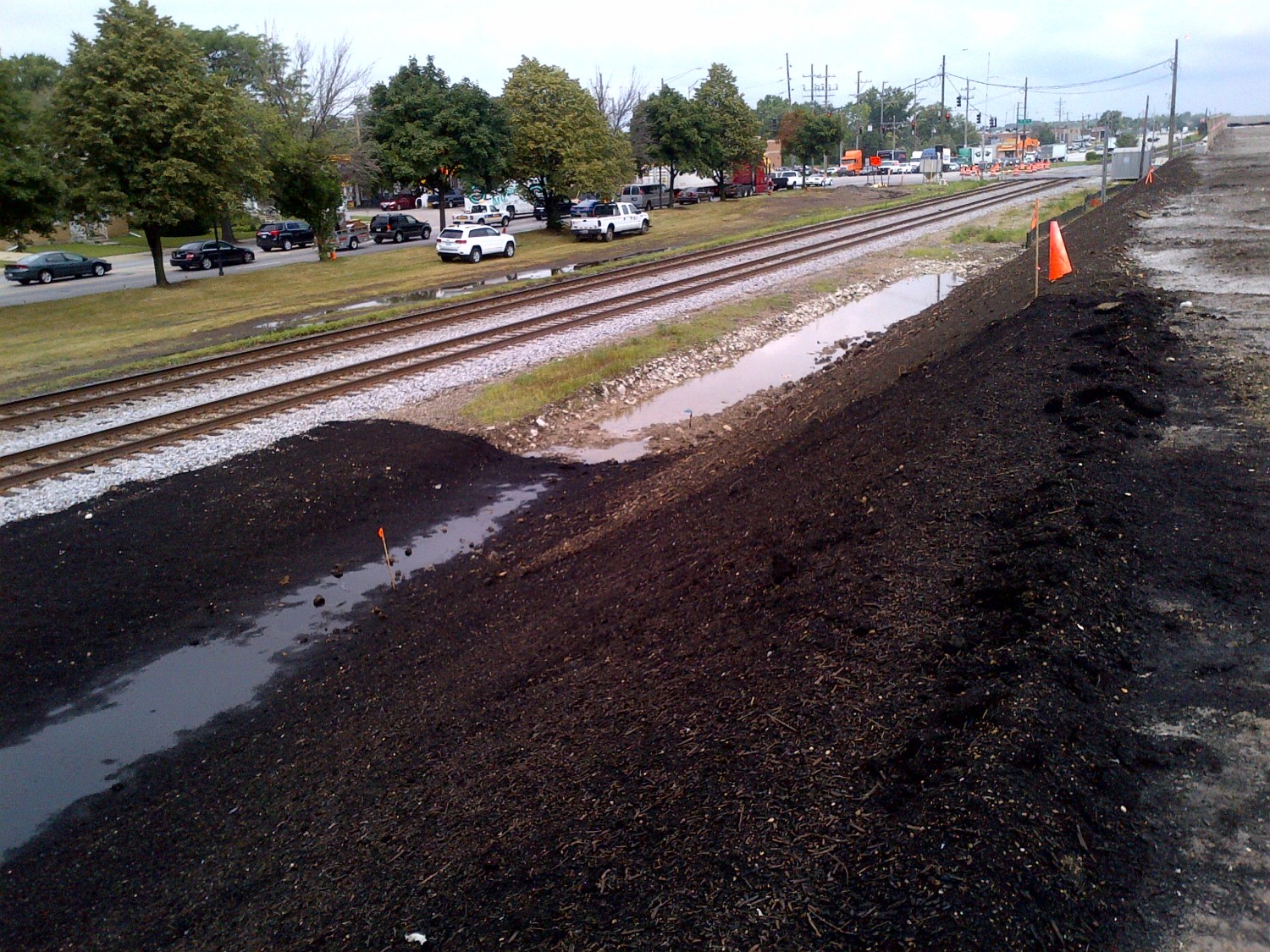 Now I’ll say at the outset, I was totally skeptical. The use of some kind of powdery “magic beads” sprinkled on the installed compost just didn’t sound right to me. We typically see hydroseeder-applied binders applied to slopes that go on wet, like shotcrete, and instantly stabilize the seed or mulch or compost that it’s applied to. Shaking on some sort of “pixie dust” with no initial liquid activation (precipitation would later activate it…) seemed hokey. But, we gave the Contractor conditional approval of the method provided that it worked.

We got rain a few days after the initial installation was made. I went to the site to check it out; I couldn’t wait to see how things looked. Lo and behold, the polymer reacted with the precipitation and, basically, “gummed up” the compost. Amazing. Even on a 2:1 slope, the compost was stable. I actually had the ability to pull floor tile-sized slabs of stabilized mulch from the surface of the topsoil, which was pretty cool. So, given that the mulch was essentially stabilized, we figured that our slopes were protected.

A few weeks after the installation, the rains came. We had a moderate 1″ rain event that, basically, soaked the site. The CA-6 suballast, the embankments & the mulch were soaked. Then, a couple of nights later, we got a 1.5″ of rainfall event that fell in downpour fashion. When I toured the site the following morning, all I saw was destruction: Mother Nature had washed the mulch right off the sideslopes. There were other areas where the Contractor had installed the final slope stabilization – 6″ of topsoil – and the the failures were just as ugly. 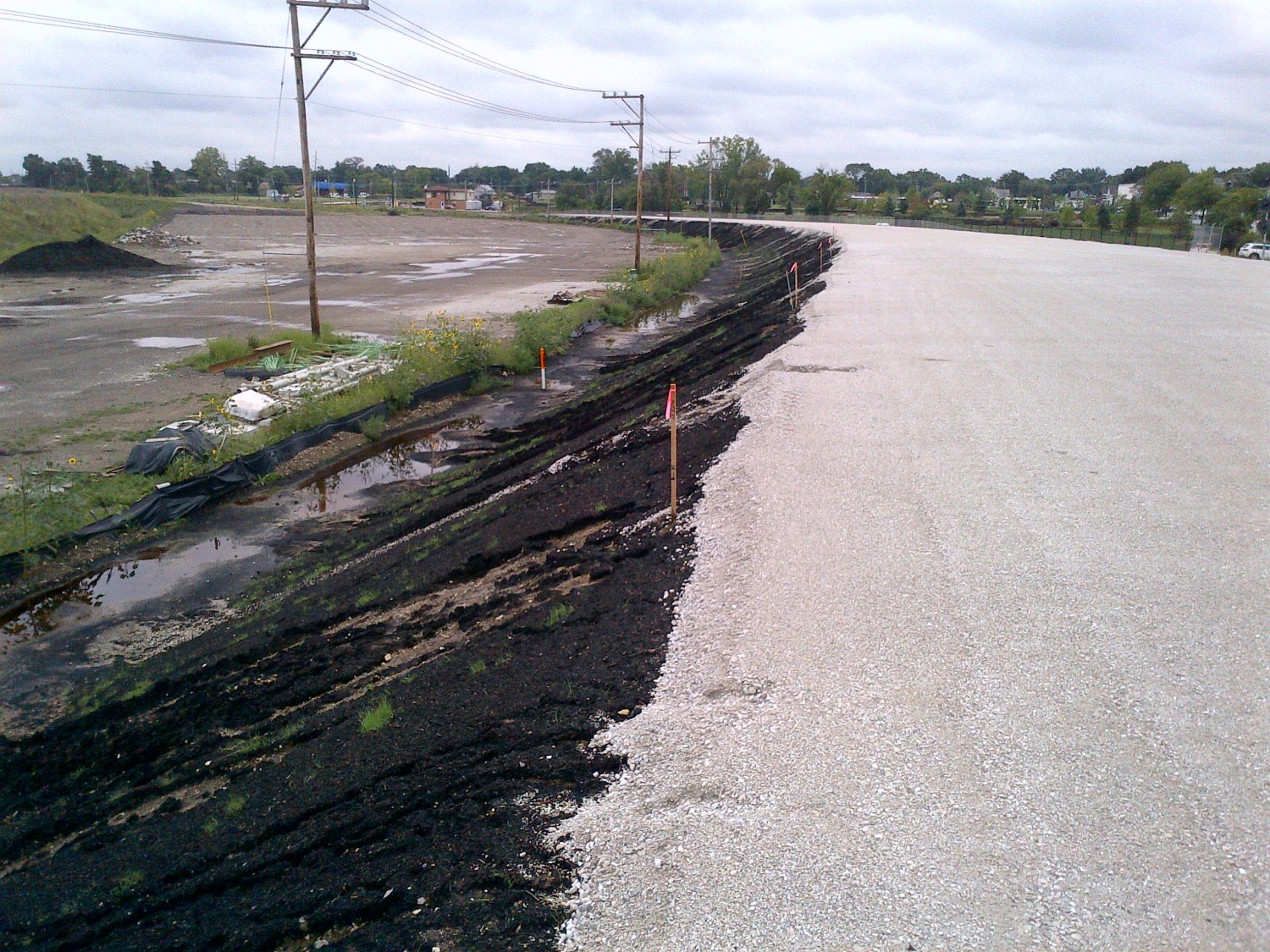 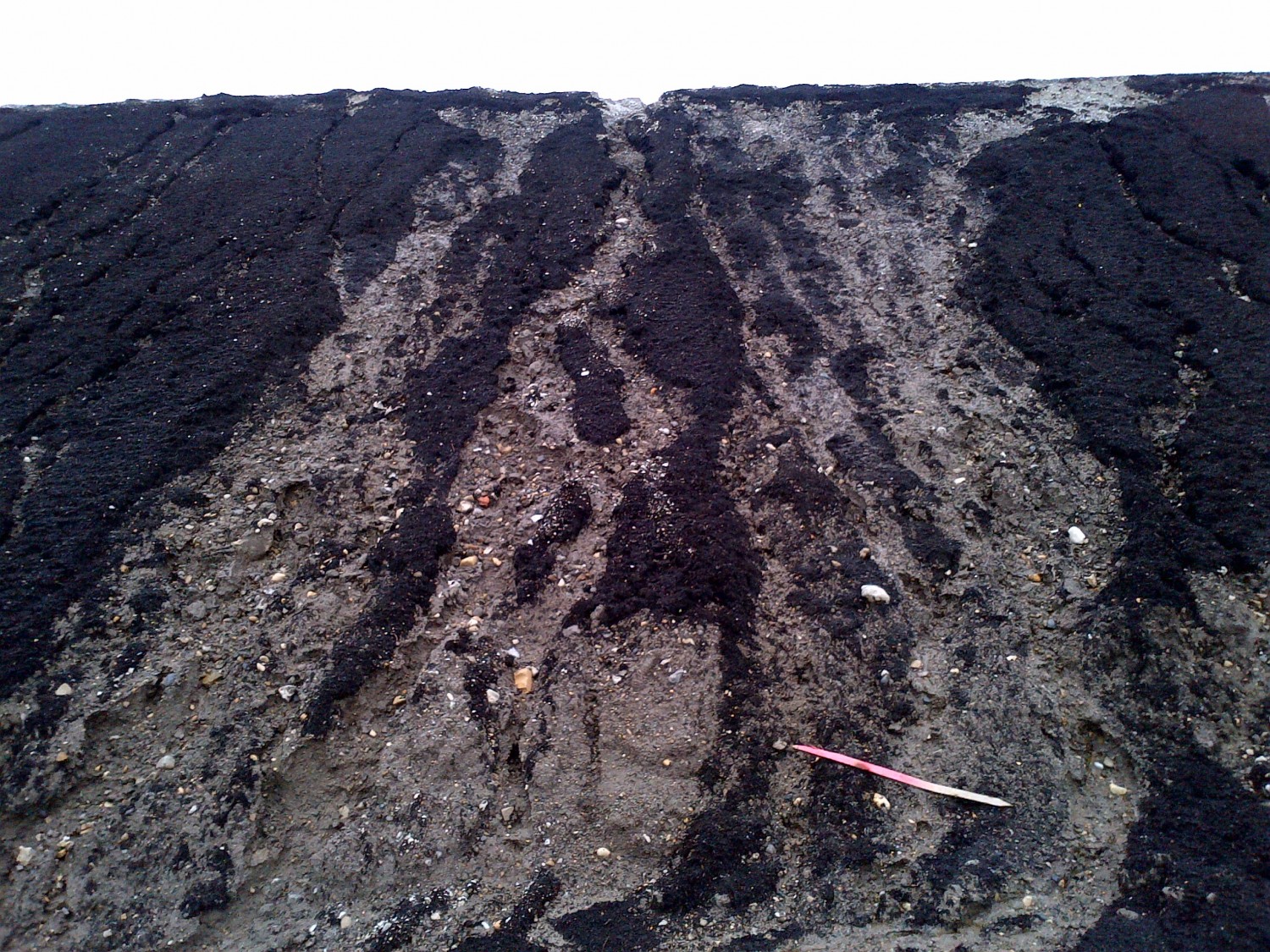 As was the case in the I-55 widening, the failure mechanism was virtually the same: Sheet flow off of the railroad embankment simply scoured the slopes. The compost had virtually no integration with the clay embankment surface underneath it, so the soaking wet compost was simply washed right off of the slopes. The “magic beads” were of no protection. And neither was the root growth from the temporary Class 2A seed that was placed as stabilization. 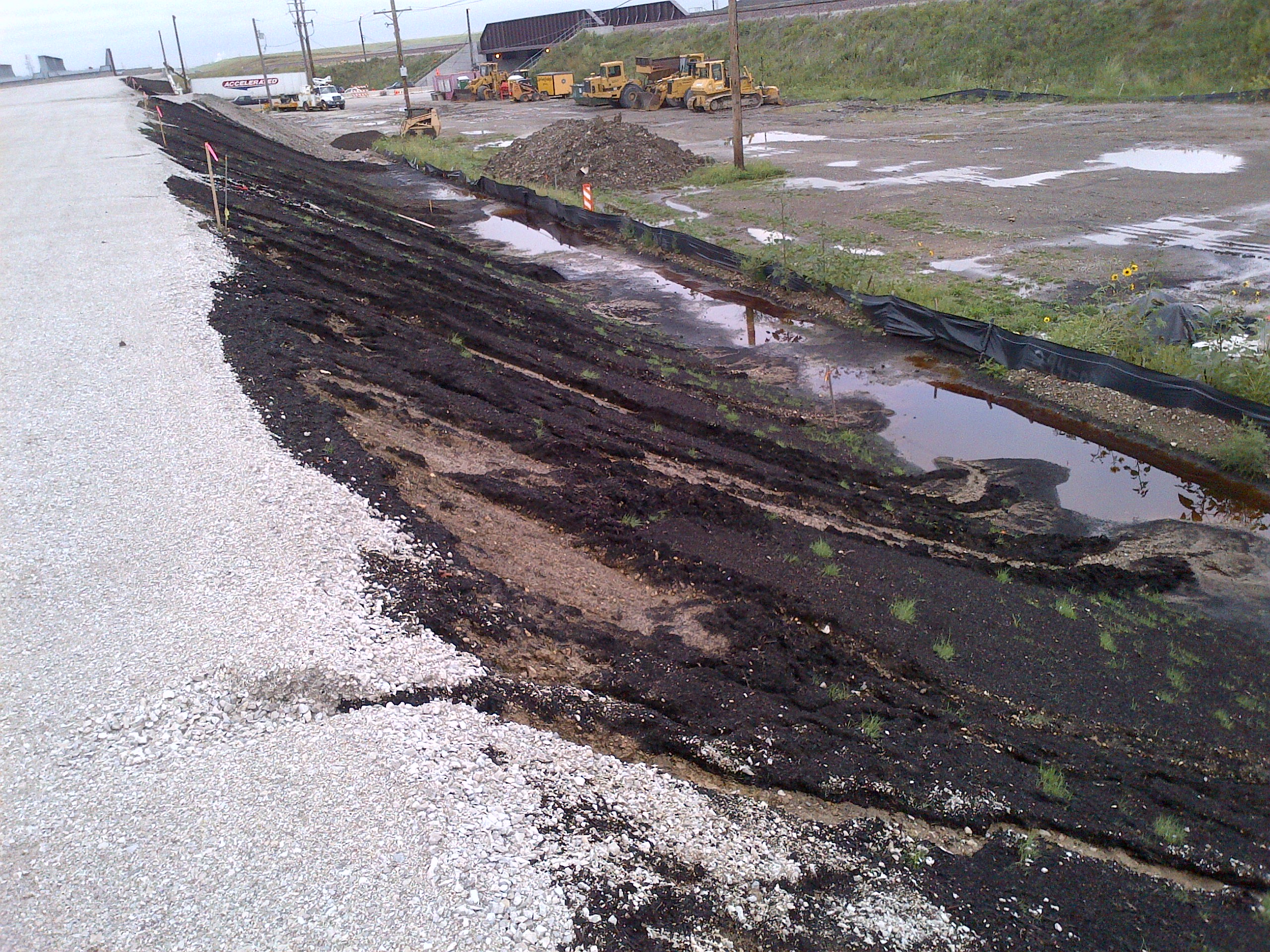 So, we petitioned the Roadside Development folks to try to figure out a corrective action plan to prevent the same situation from occurring again. At that time, I had drafted several different options: 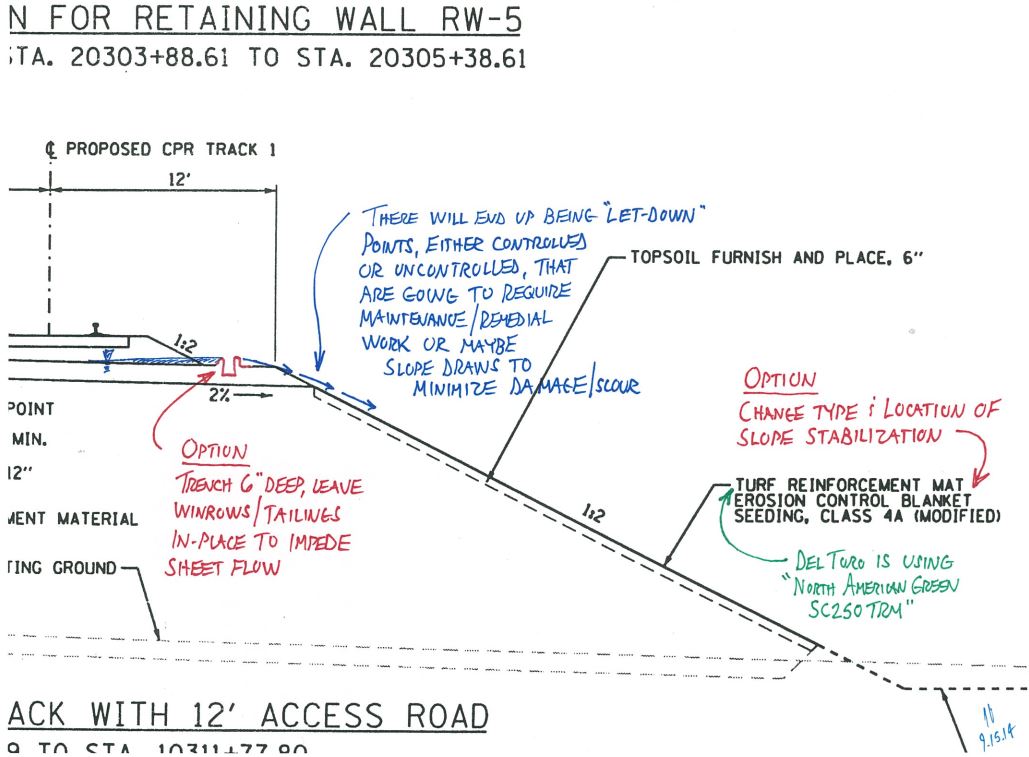 IDOT decided that the trench option (which was my primary recommendation) would not work and that we should use a heavier-duty blanket-type control system. So that’s what we did.

And months later, guess what happened?

As construction progressed, the embankment Contractor was able to install the final landscaping treatments: 6″ of topsoil was installed with a roadside-type seed and erosion control blanket. We had numerous areas where the slopes remained stable for a long-enough period of time for the seed to begin to germinate.

But months later, deluge-type precipitation hit us again. Even with the vegetation beginning to root and the blanket being in place and toed-in at the top of the slope, the failure mechanism was the same: Sheet flow saturated the topsoil, it delaminated and slid down the slopes. 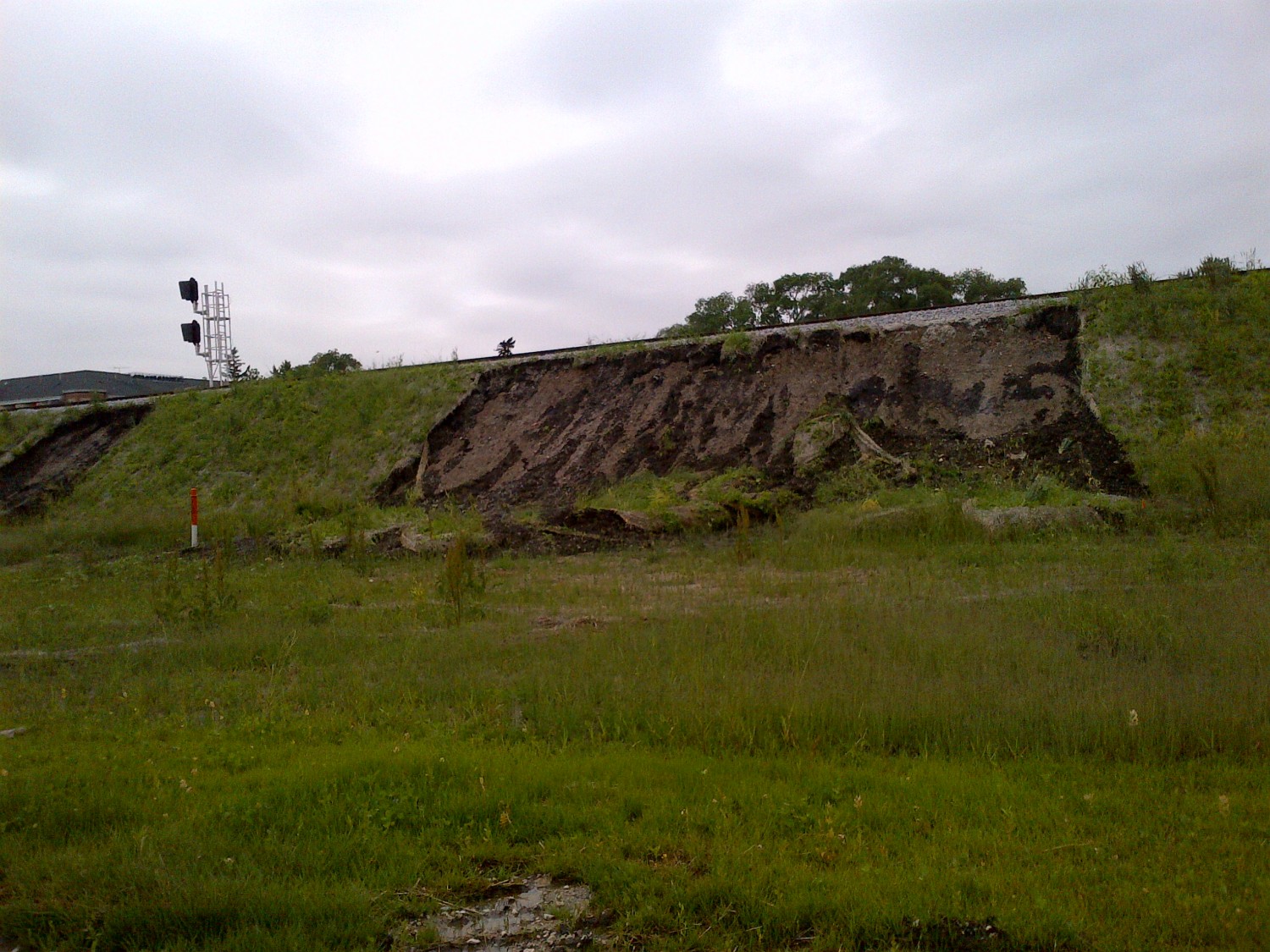 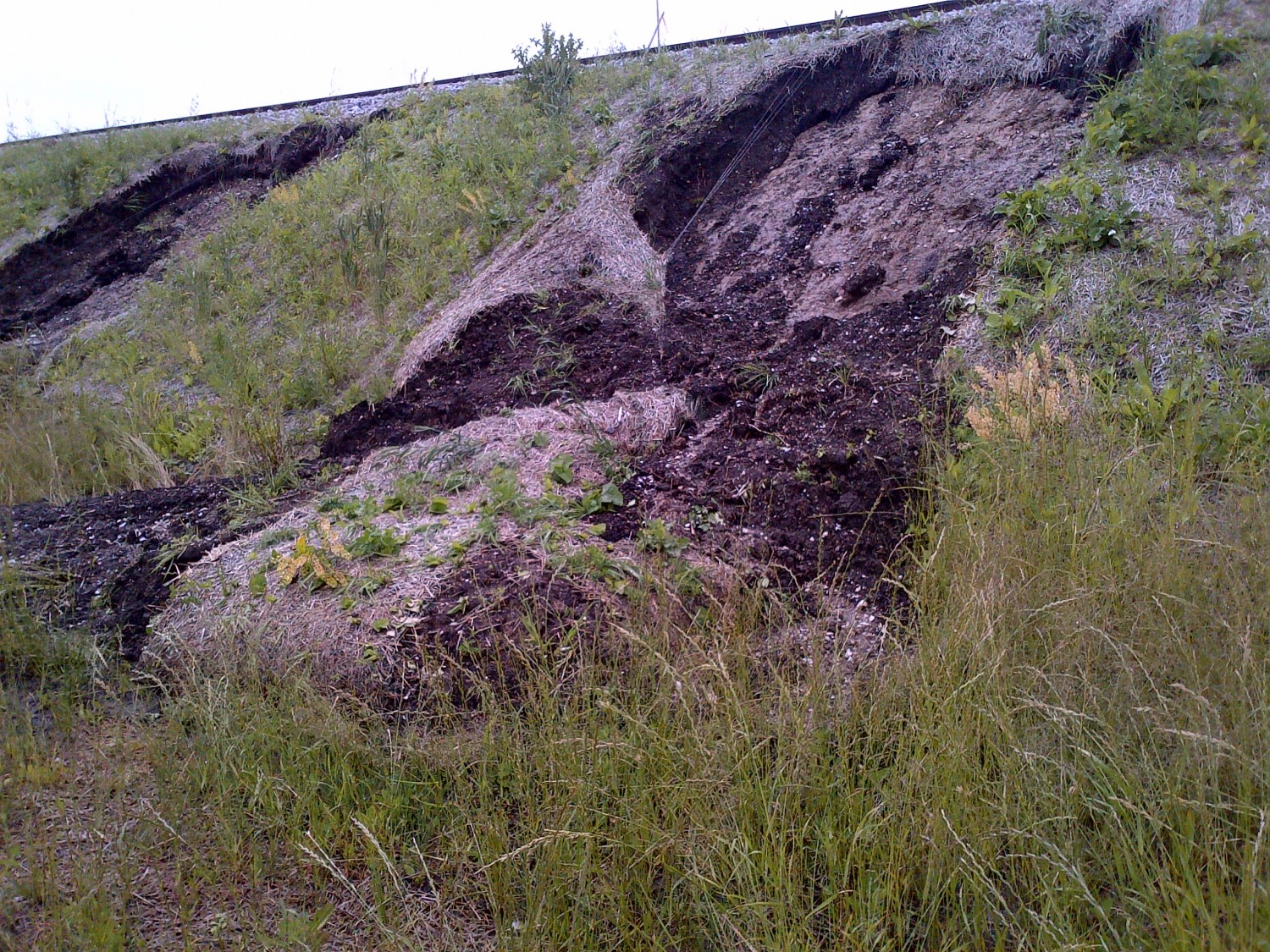 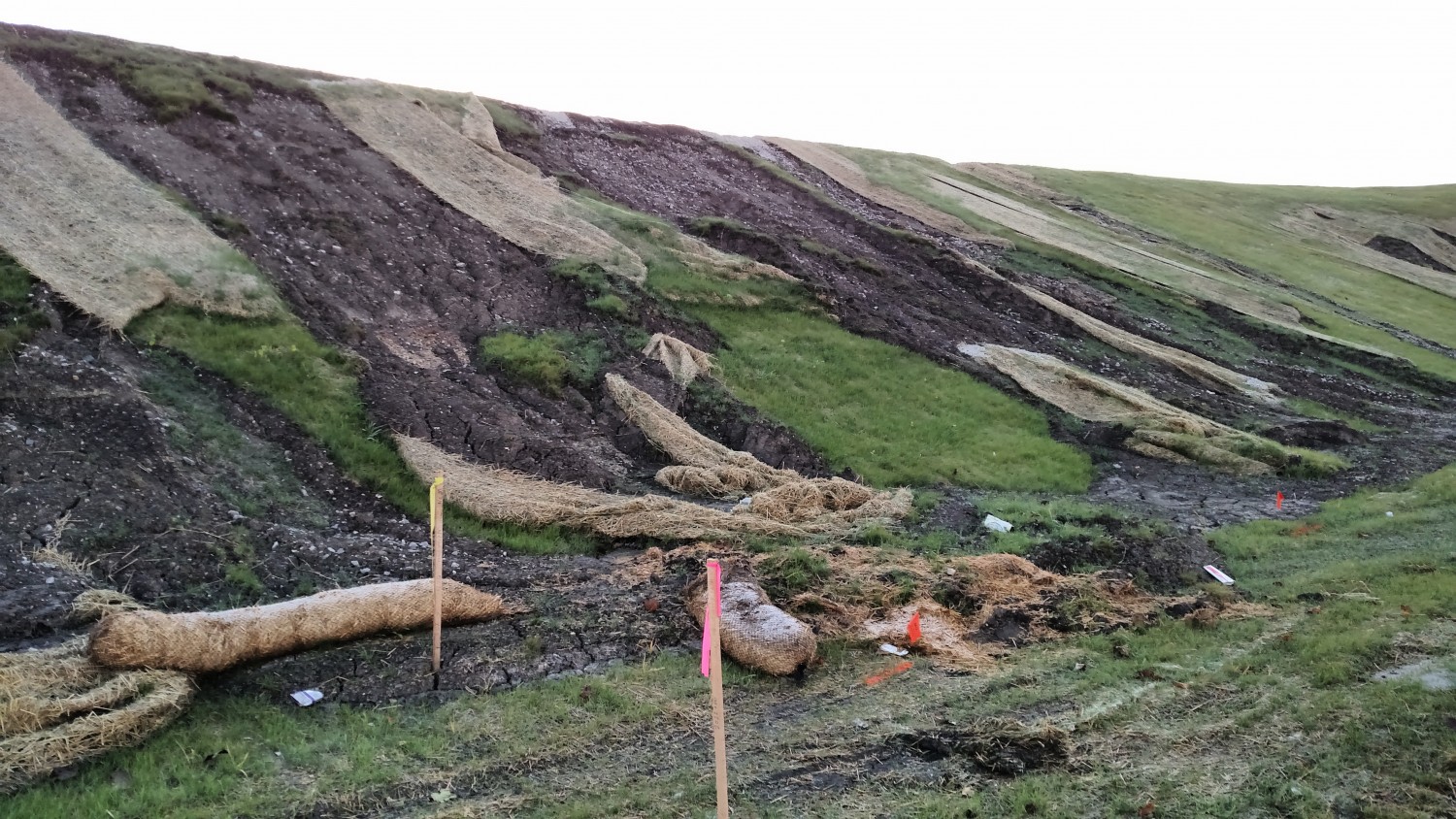 So now what? Well, do I get to use the phrase, “I told you so,” or would that make me out to be a condescending a-hole? OK, well, there, I said it..

But we’ll deal with that at the end of this article. Let’s get the problem solved first.

The problem, as we identified early in this process, was uncontrolled overland flow. A problem has to be mitigated at its source, and neither of the previous solutions accomplished that. The initial fixes tried to increase the strength of the stabilization, but the inundation of sheet flow off of the subballast was simply too volumous for any unprotected slope to withstand.

The fix needed to control the source. See Proposed Solution #1 (above). That’s what we did. And it worked.

We had the Contractor kerf a shallow trench along the edge of the subballast. This was the prevent mechanism to keep the uncontrolled sheet flow from scouring the slopes. And now that we had the flow controlled, we could direct it down the slope on our terms. We installed slope drains using, in this case, temporary corrugated plastic pipe (nice and cheap…) to control the flow down the hill.

We issued a field directive to the Contractor, implementing a trenched gutter in the subballast stone, draining it to outflow to a 12″ diameter corrugated pipe: 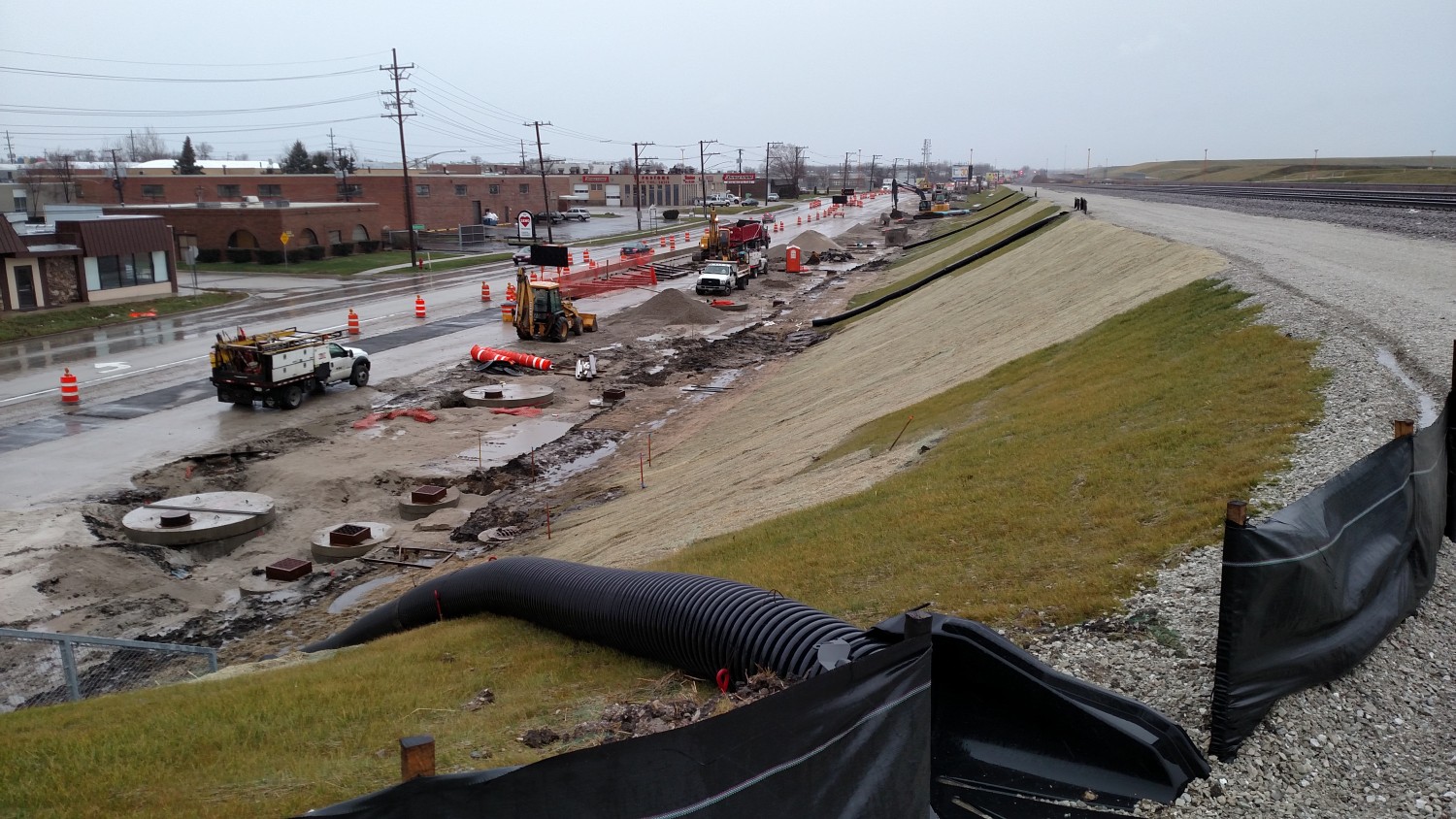 And guess what: To date, it’s functioning like a charm. Problem solved. Done.

The best part of solving a problem is seeing the solution work. The worst part is spending money fixing something that, if properly thought-through and designed for, should not need to be fixed. So part of the return-on-investment of instances like this is to learn from them and hopefully not succumb to them in the future.

So what were my take-aways?

Acknowledge that Precipitation Is The Enemy

Whether we want to admit it or not, water is construction’s enemy. Rain wreaks havoc with us. Sometimes we spend an appropriate amount of time & expense trying to protect our sites from its power. And sometimes, we ignore it, pretend that it won’t happen and disregard its destructive capacities until it’s too late.

Don’t be that engineer.

It is our job to anticipate problems. When faced with a predicament, take the time to assess the situation. I’ve said it before: OODA. Observe. Orient. Decide. Act.

In this case, the observations and orientation were front-and-center: Rainfall is going to make a mess. How can we prevent a mess? Look forward. Prepare for it.

Steep Slopes Are Going To Challenge Your Fortitude

OK, so I’m not throwing mud in this point: We’re in post-mortem phase at this part of the post. Let’s be big boys and girls and call it like it is: The design failed. Let’s learn from it.

2:1 slopes are steep. Really steep. They are constructible, yes, of course. They are stable when built properly. Check. But to install the finishes to protect them from Ma Nature requires more forethought than just spec’ing topsoil, blanket & seed and expecting the “Construction Guys” to figure it out.

Mistake #1 – The overland flow was not channelized.

Mistake #2 – The erosion & sediment control elements selected for the project were wrong.

And I made Mistake #4 – Push for a proper solution instead of “Going Along with Management.”

Sure, I slept every night comfortably knowing that I probably had the right solution but was over-ridden by supervision. And although “I told you so’s” stroke your ego and maybe make you feel like the smartest cat in the office, they don’t have a checkbook to pay for repairing damage. Do your best to push the issue. Present the strongest case you can for implementing your ideas. People will listen.

As engineers, we know the power of water. Left unbridled, water can destroy. Exposed earth, in any kind of condition, is a haven for precipitation to wreak havoc.

Here’s a big problem: Establishing turf is a time-consuming process and is dependent on Mother Nature cooperating on lots of fronts – Sun, temperature, precipitation all play into the mix. Consider these factors as you prepare to stabilize a slope. Are they favorable for your installation? Or is it, say, November, cool & wet where you aren’t getting anything established anytime soon?

Don’t expect a miracle. Precipitation is going to hit you hard at some point. So you need to put the water where you want it.

Channelizing surface runoff is mandatory. Sheet flow, as I’ve presented in our failures, crushed us. Once we got the flow contained & controlled, we were able to give Ma Nature a chance for the permanent erosion control elements to establish themselves.

Retrospectively, when I look at the way that I navigated these failures, I have mixed feelings.

The I-55 slope failure was the first time I’d have experienced a stability issue of that magnitude. I / we didn’t anticipate it. The designers didn’t anticipate it. But we figured it out – Overland uncontrolled flow control was the cause, and we implemented a solution that mitigated it. Problem. Solution. Implementation.

The railroad embankment failures frosted my pumpkin. I could see the issues developing early on. I suffered through it already, it was going to be a condition that we are staring at again. Problem identified.

But, the Solution & Implementation phases of the fix were taken-over by others who didn’t see what I was seeing. They were working from a Pollyanna-ish perspective – It’s all gonna be OK, Bob. Don’t worry. You’re over-thinking it like you always do. Get the mulch on the slopes and it will be fine.

I should have been more-vocal. I should have kicked the beehive harder. I should have printed out the pictures of the I-55 destruction on 11×17 color paper to drive home the point that we’re going to get punched in the teeth, it’s coming, and just bracing for it isn’t enough. But I didn’t. I let Leadership do what it wanted to do. Again: There’s nothing gained by I Told You So’s….

I’ve said it in past posts: Don’t be afraid to be the Chicken Little on the jobsite. Call things out when you see them. Develop solution scenarios that can be implemented. Raise your concerns with Leadership. Let your diligent efforts speak for themselves.

Feel free to hit me up with any situations that you might be running into that are similar to these, I’m always happy to lend a hand in helping solve a problem.

Construction engineering can sometimes be, well, OK, I’ll say it – It can get boring…. I know, you’re going to jump down my back and tell me I’m being hypocritical. “Oh c’mon, Bob, you always […]

Taking the leap and starting a blog was, initially, a difficult step for me. For a long time, I’ve had the desire to write, just never had the time. Correction: Never MADE the time…. Our […]