There are some people I know, when talking about their “college days,” who can recite chapters & verses of classes they took. They can remember class numbers, people in the class, problems they solved, the most miniscule details of life being a college student.

I am NOT that guy.

I don’t know if it is from getting hit in the head with too many pucks or being blind-sided by too many checks, but I will continue to use the hockey rink as my crutch for why I can’t remember as much as I used to. My recollection of college is more like a speed smear – colors and lights flash by, but definition is not always in full view. That’s not, of course, to say that my brain is fit for a bottle of formaldehyde just yet: There are some very vivid memories, concepts, and anchors from my educational pursuits that have stayed with me since the ’80’s….

Dr. Marshall Silver was my soils & geotechnical professor. He left an indelible mark on me and the trajectory of my career. I’ve always loved soil mechanics. Soils are never the same. They always bring subtle challenges that the folks who work with concrete & steel aren’t always presented with. I’d say I am proficient with soil mechanics, I think I know my way around a stockpile enough to be effective in what I do with my knowledge bases.

Slope stability is one of the soil mechanics concepts that those of us in construction deal with a lot. Embankment construction, trench excavations, roadway sideslopes, aggregate shoulders – They all share stability as one of their functional components.

Way back when (I can’t believe I’m at the point in my life when I can say that…), I have vivid memories of working with a FORTRAN program (look it up if you have to ask what FORTAN is..) that modeled various soil properties and geometrical constraints for, what is known, as a Rankine Slipped Wedge Failure. Those computer runs, specifically the quantity of data that we had to input to get the program to run, to this day, have stuck with me. And of course, the failure conditions by which can occur, to say the least, aren’t pretty (re: Landslide).

I am a product of my environment. And slope stability is always front-and-center in my mind during construction.

So when a slope fails, or when slopes (plural) fail on my watch, it’s doubly disconcerting. I’ve seen several slopes fail significantly in the past 10 years of construction. None of the failures resulted in any loss of life or property, but they were both pretty ugly. We fixed them. Life went on.

As one of the missions of my work here is to convey my personal Lessons Learned onto those who chose to read, both situations are rife with opportunities to learn from failure & error. Both failures were similar in cause & effect, and both deserve a post-mortem review.

Widening of Interstate I-55 north of US Route 30. An exit ramp deceleration lane and new shoulder were constructed adjacent to the existing 3 lanes of expressway. The existing embankment was widened to accommodate the pavement widening.

It rained. Mother nature took care of the rest… 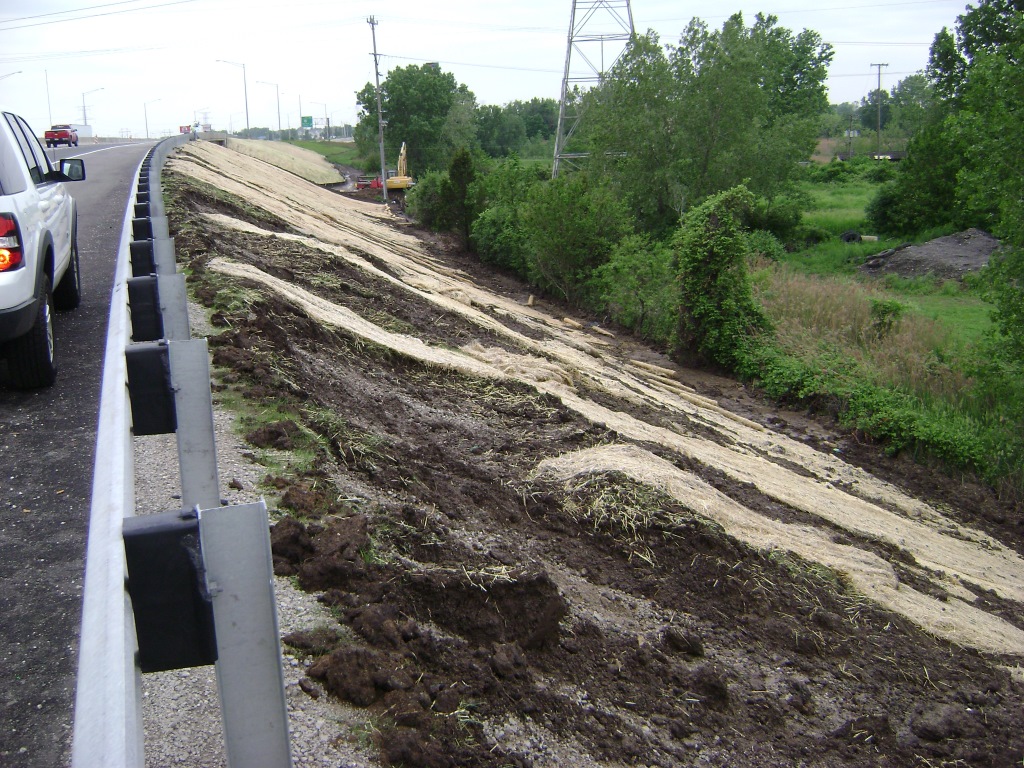 Let the picture tell the the next 1000 words. The rainfall that started the failure cascade wasn’t an inordinate amount of precipitation for northeast Illinois, maybe a 1.5″ rainfall event as I recall. The embankment 2:1 slopes held up (some minor, localized washout pockets developed…) but the significant failures occurred in the topsoil, where it simply slid down the slope. It was a mess. A fixable mess. And a costly mess.

Let’s look at the conditions we had.

In this vicinity, I-55 is, with our newly constructed widened lane, 4 lanes wide + 2 shoulders wide, all in a superelevated section. That’s A LOT of water. 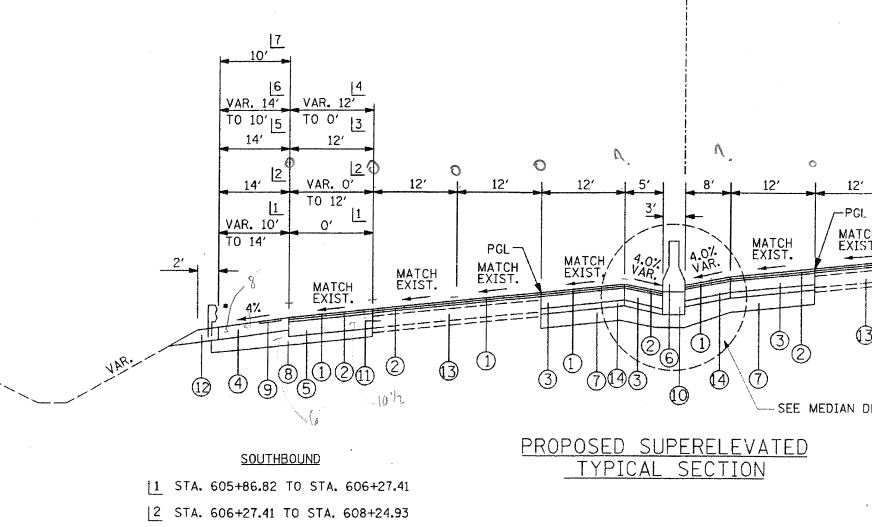 Now let’s look at the cross section: The slopes were exposed to uncontrolled overland flow from 6 lanes of pavement hitting a newly-constructed slope of earth. Mother nature is going to take her shot when she can. There was no flow control along the edge-of-pavement. The designers counted on the aggregate shoulder to dissipate the sheet flow’s velocity. And although the topsoil was blanketed, the seed had not developed any appreciable roots to stabilize the material. And the blanket functionally provided no protection to the slope. The precipitation migrated into the topsoil from underneath the blanket, saturating the topsoil. Simply by weight and along the slip plane formed between the topsoil and the earth, the topsoil was unstable and failed. 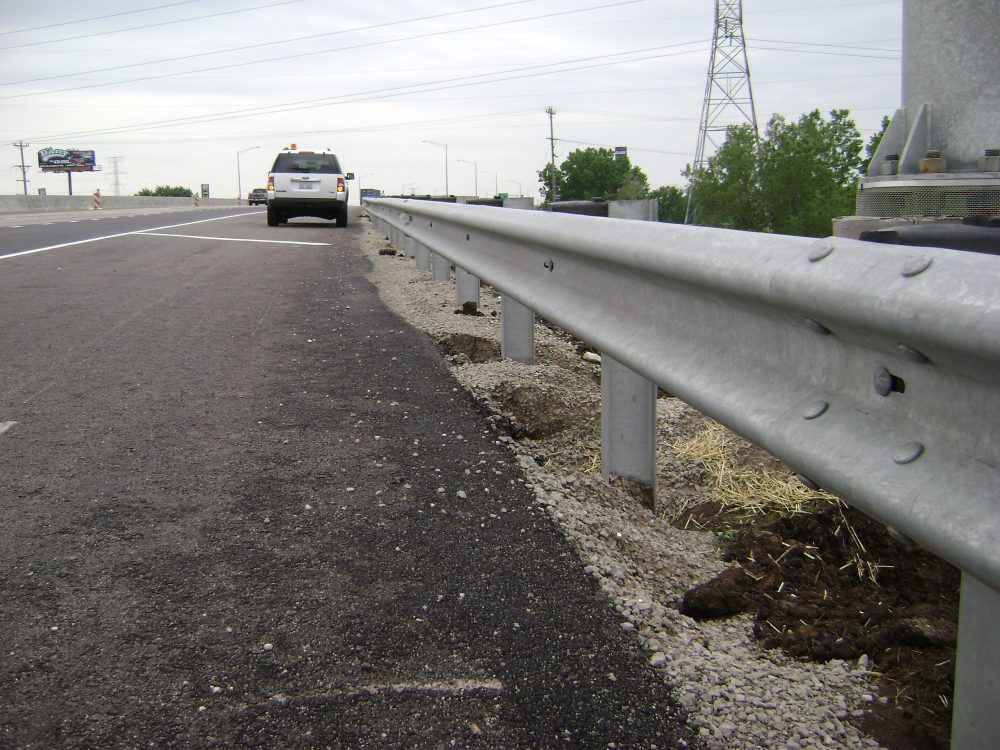 In my next post, I’ll show you another slope failure – correction – failures (plural). We’ll take a look at the corrective measures we took to prevent future occurrences, and we’ll discuss the lessons learned from both events.

In the heavy highway industry, we get the opportunity to work with a variety of construction materials and components. Concrete. Asphalt. Steel. Rebar. Aggregate. Soils. Sewers. Water main. Lighting & wire. Becoming an expert in […]

If I’ve experienced any significant shift in the construction industry in the last 25 years, jobsite erosion control is on the top of the list. Mitigation of sediment-related issues has gone from what used to […]

Asking the Simple Question – The Solution

In my previous article (CLICK HERE to read it), I described the maturation of a piling bearing capacity issue that we had on a recent railroad bridge project. Let’s dive into getting the issues resolved. […]