As I developed in my last post, engineers in construction are often-times thrust into situations of RISK that, in many instances, are completely beyond their direct control. I’m going to take you on a tour of my life a few years ago to paint a picture of RISK in action and give you an appreciation as to why I have a heightened awareness of the issues surrounding it.

It was a October weekday, clear weather, I was in our Crest Hill field office east of I-55, it  was lunchtime. I got a call over the Nextel from one of the guys – “Hey Hilde, grab the camera and head to the Rt. 30 entrance ramp, looks like an accident.”

When I got to the top of the ramp, Plainfield paramedics, an Illinois State Police officer and a flatbed tow truck were already on-site. Apparently, a motorcycle rider took a spill. He was sitting on the guard rail, dazed but had been walking around. The tow truck driver loaded the Harley onto his flatbed. The rider was taken by the paramedics to the hospital. Fortunately, he was OK, his bike was banged up. There were plenty of barricades on the ramp, signs & temporary pavement markings were in-place. The Contractor had paved the mainline lanes of northbound I-55 a few nights before, as I recall, but had not completed the entrance ramp or the gore, which meant that there was an 1-3/4″ lip left where the new surface course ended, a leading edge as it is known. The condition is permissible by the contract specifications, so truly, nothing seemed out-of-ordinary. 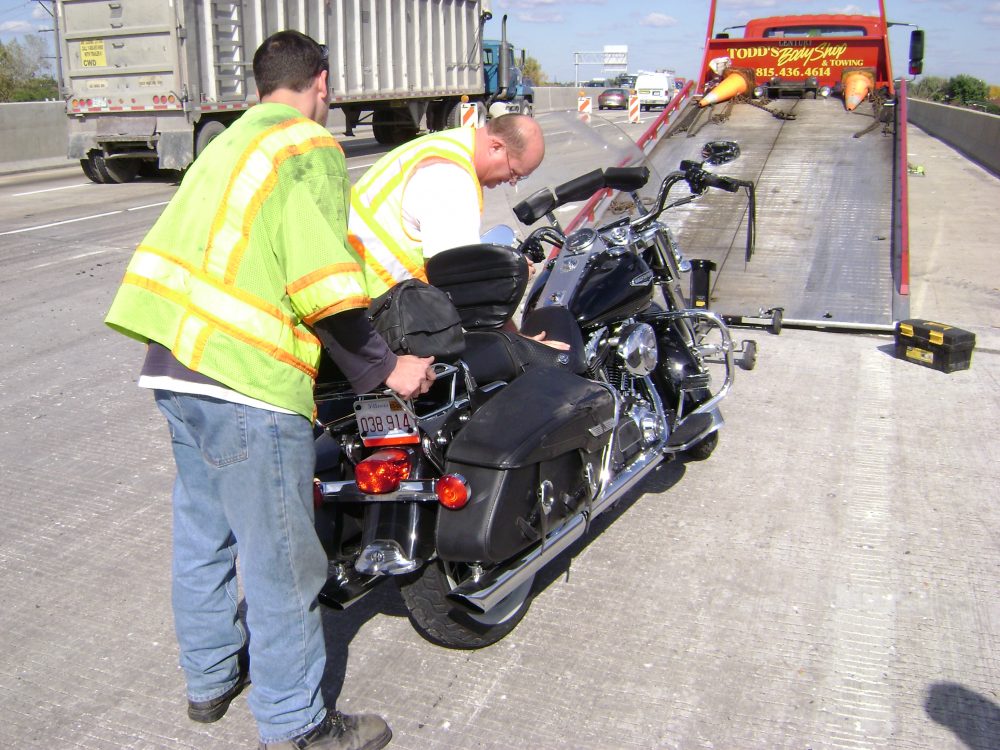 In the field, our protocols are to get an accident report number if it’s available, jot down as much information as we can relative to the incident, and get some pictures from the site. I typically make it a point to walk on either side of the incident. You can never have enough pictures and digital memory is virtually free anymore, so I grabbed a few. I made an entry in the job diary with the information from the accident, and I dumped the digital pics onto our network.

Several months went by, and then in February, I got an email from the District asking for a summary report of the incident. Apparently, the motorcyclist had filed a claim regarding his accident. I assembled a short report with a picture of the site. The claims people at IDOT handle these types of issues all the time and very rarely engage with us in the field beyond just getting background information of the occurrence. And that was it. Or so I thought.

About a year had past, and then out of nowhere, the news came in: Our company was named in a lawsuit regarding the accident. I would need to give a deposition. Apparently, the claimant sued the Contractor, the IDOT Resident Engineer & our company. He was seeking reimbursement for damages to his bike, medical bills and lost wages.

The following months would put me on a mental roller coaster. A guy driving a motorcycle took a spill in a construction site that 50,000 motorists a day navigated without incident, yet this one driver, on a clear day, at some point while trying to enter an expressway took a spill. How did it really happen? Was it really the lip that spilled the bike? Was it driver error? What was mainline traffic doing while he was trying to merge? Was somebody not paying attention? What really happened? Where there witnesses? Or is the driver the only person being relied upon to tell the story of what happened? In a legal dispute, it doesn’t matter: We were all being accused of doing something wrong, like it or not. Everyone, stop what you are doing, attorney-up, divert your attention, efforts, emotion and money to defend yourself. By the way, there’s no reimbursement for your efforts, it’s just a “cost of doing business…”

Unwillingly, I was thrust into the legal system. And the process plain old sucked. I was fielding calls from the claimant’s attorney, from the Contractors’ attorneys, IDOT”s claims people, our corporate people, everyone wanting information, asking questions, wanting to know what happened, who did I think was at fault, etc. Every player in the movie was working from his own script, keeping their own agendas, every word coming out of my mouth being potential court room fodder, used for or against. It was a march up a steep, muddy, slippery hill, all the while not knowing what was on the other side….

As deposition day approached, I got a call from Kevin, our president. He gave me a lot of good advice on how to handle myself during the session:

–Answer the questions as best as you can,

–Don’t feel the need to expound, just answer what is asked,

–You didn’t do anything wrong, so don’t feel that you are on the defense, just answer the questions truthfully

Kevin was so confident with our lack of standing in the claim that he wasn’t going to send an attorney with me. He had the confidence that I’d be able to handle things on my own. If I wasn’t already un-nerved, the thought of flying solo in my first-ever deposition wasn’t putting me in any better head-space.

So for the few days before I was to be deposed, my mind was in full engagement. Driving to and from work, I was thinking of questions that I might be asked, thinking about inspections and previous reports we’d filed, thinking of things we did, pondering things that we could have done, all the time, wondering why I/we were being dragged through this. Laying in bed, the questions swirled. We did our job. But someone was challenging that, or thrusting us into a position of defense, that we didn’t do our job.

Nothing pisses me off more that having my integrity challenged. I was fired up! Why is my mental energy being spent like this? I’m burning up hours of what is left of my life worrying about an event that was, basically, out of my control. Why am I being hog tied and dragged into this? What, if anything, did we do wrong? If you are accusing me of something, then Man Up, bring your A-Game and tell me, show me, prove to me that I did something wrong instead of sitting me down and interrogating me.

So in all of my mental gymnastics, in all of my prep work, reporting, picture taking, reviewing our documents, etc., the only question that I could never answer was this: Were the UNEVEN PAVEMENT signs in place on the ramp at the time of the accident? And my honest answer was: I DON’T KNOW.

Engineers don’t like saying I DON’T KNOW. We are trained to KNOW things. We are trained to have the correct answer, all the time. We have checks and balances in the way we work to mitigate not KNOWing things. I was frustrated that I didn’t KNOW. I like to ALWAYS KNOW. It was  unnerving for me that I didn’t KNOW the answer to this question. Was it significant? Would it be an issue in the proceedings? Was someone else able to answer that question? How critical was the presence of, or lack thereof, an UNEVEN PAVEMENT sign? Would the I DON’T KNOW put us in a position of fault?

I’ll conclude this series in my next & last post on RISK – How did the deposition go, what lessons did I learn from it, and what can construction engineers do to better-manage RISK when it comes to Traffic Control.

Episode 3: Are You Training Enough?

In this episode of the Construction Engineering Show, I spend some time discussing training and the need for civil engineers and construction personnel to always be thinking about training. Making the excuse that there aren’t […]

Asking the Simple Question – The Solution

In my previous article (CLICK HERE to read it), I described the maturation of a piling bearing capacity issue that we had on a recent railroad bridge project. Let’s dive into getting the issues resolved. […]

During the week of September 14-18, OSHA is sponsoring its 7th Annual National Safety Stand-Down to Prevent Falls, which is a national awareness campaign centered around fall protection. Here’s the deal: Falls are preventable. As […]