I recently came across a question asked by an engineer regarding the use of manufactured sand in concrete – Is it permissible to use recycled materials when producing concrete?

The answer is certainly Yes, but, like anything in engineering, the answer is never simple. Material properties are inherently variable and require consistent testing & monitoring. Mix designs start with assumptions and parameters but are tested, adjusted, checked & rechecked. And even once a satisfactory product is developed, the checking & monitoring process continues.

Engineering is an endless series of questions & answers. 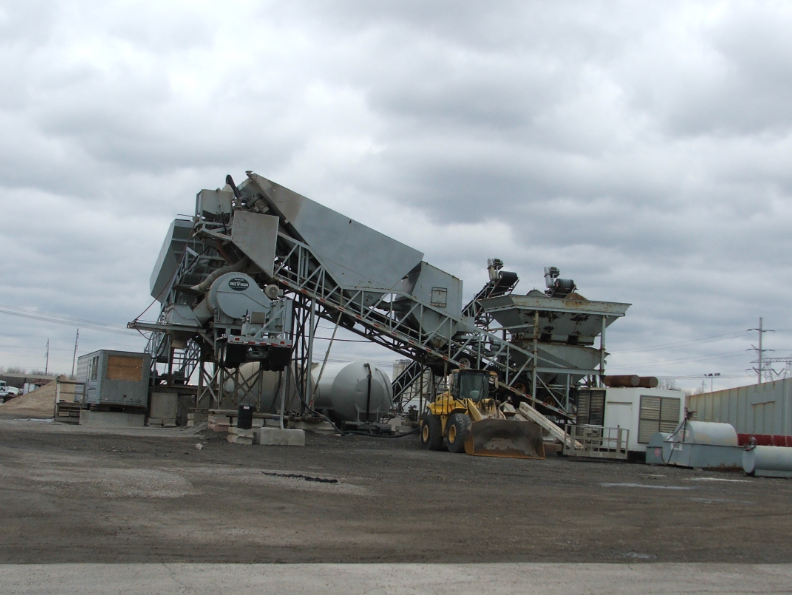 It’s why we became engineers in the first place, right? The constant chase of The Right Answer.

The question that was posed took me immediately back to the summer of 2008 when that simple question about manufactured sand caused a whole lot of very smart engineers got schooled on how material selection isn’t always a cut-and-dry process.

In 2007 & 2008, our crew was involved in the widening of interstate I-55 through Plainfield, Illinois. We were working for the Illinois Department of Transportation, D Construction was the contractor. The project widened the, then, 2-lane section of interstate, to 3 lanes by adding a lane in each direction along the interior median.

The job got off to a bumpy start in 2007: It took our crew and D’s crews some time to get accustomed to each other’s Standard Operating Procedures. As the 2007 construction season took off, D has a ton of work. Their field crews were great to work with, but, because of the volume of work that they had on not only our project but on multiple projects in the area, their crews were stretched pretty thin. Some days, crews would be on-site, other days, they’d be pulled to other sites. Often times, we’d get word late in the day that a crew was going to work well into the night to finish an element. Other times, we’d get a call at the end of a shift telling us that a crew was on the way to the site, requiring us to scramble staff to cover the activity. It was a trying time for our crew, to put it mildly….

As the season went on, the work schedules stabilized: Our crews got accustomed to each other’s SOP’s  and the project made a lot of great progress. As sections of the existing ditched median were carved out, new storm sewers & pavement were installed. By the summer, paving work was topping out and prep work for installing the new median concrete barrier took shape.

With miles of concrete median barrier to install, D opted to go with the slipmform method of installation. This was not the first or second or third time that D slipformed concrete, this is one of their bread-and-butter operations.

Famous last words, right? I wouldn’t be writing this article if it went well, right?

From the start of the very first pour, something was wrong.

As the concrete was leaving the slipform machine, it was tearing. I know: “Tearing” is not an verb that is often associated with concrete placement. But that’s what was happening.

D’s crews obviously where pulling out as many stops as they could to get the wall to not tear: They tried slowing the machine down. They made adjustments to the internal vibrators. They had the concrete supplier tweak the mix.

Something wasn’t working right. This is NOT what slipformed barrier wall is supposed to look like.

The guys on the finishing crew working behind the machine were getting their asses kicked as they had to constantly try to close the concrete. There was lots of hand-packed concrete being hand-placed to close thegaps we were seeing. The concrete didn’t seem to have enough internal stability to remain standing. If D made mix adjustments to try to loosen the mix and promote better consolidation, the mix sluffed off and toppled over.

And as the concrete was extruded and shifting, the guys had to often-times add mix to the top of the wall to maintain the correct wall height, which meant a ton of extra hand-work that they usually wouldn’t have to do when things were running smoothly. All the while, we could see voids inside the barrier that were being sealed up from the outside…. 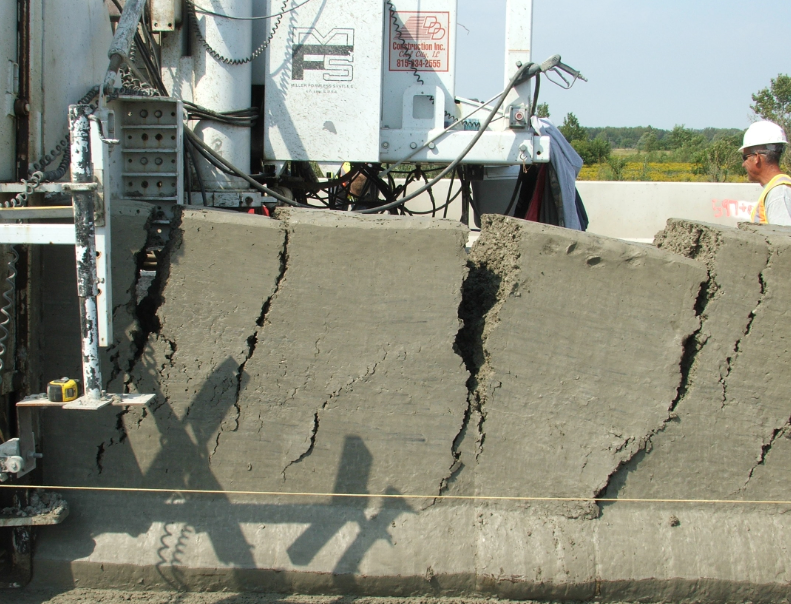 This went on for a couple of weeks. None of us, from our crew, to the folks at IDOT to the guys at D had ever experienced anything like this before.

IDOT called for a meeting with the Contractor and the supplier – Something had to change as the problem was not getting solved. We could not continue to accept the median barrier as it was being installed. We cored several sections of wall where we found  large voids that were closed from the surface. D ended up having to remove and replace numerous installed sections

D’s production numbers were down. Removal and replacement of anything for a Contractor is simply money down the drain. Not good for anybody.

D and the concrete supplier were now at odds with each other: Was it the mix? Was it the machine? Was it a  combination of causes? Why had neither experienced anything like this before? 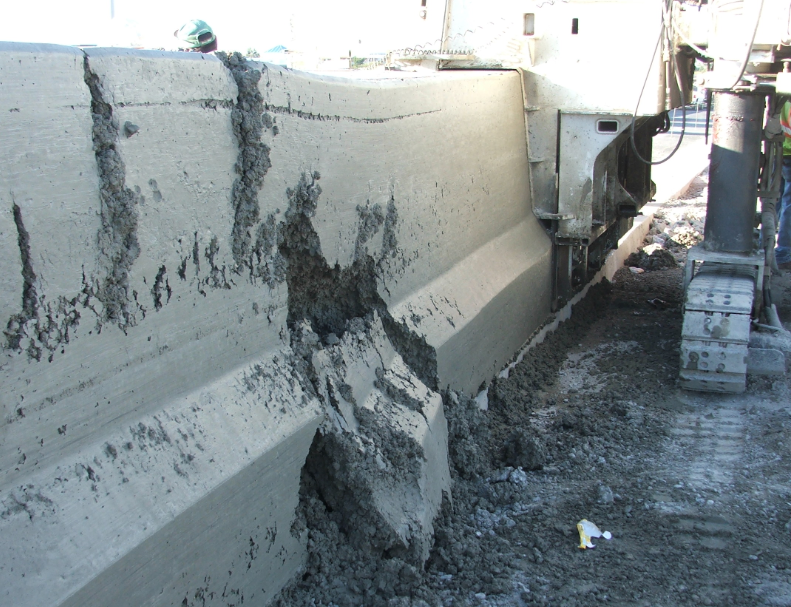 The concrete supplier was making tweaks to the mix design to try to help aid the situation: They adjusted & tried different admixtures. They tried adjusting the cement/fly ash percentages, even at once point, going to a virgin cement mix. Still , the problem wasn’t getting solved. 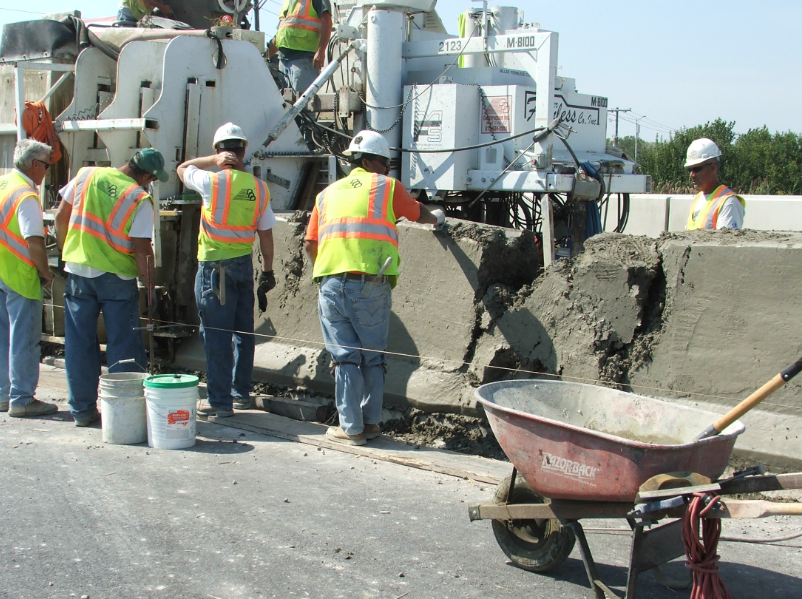 Then one day, we got word that the supplier was getting close to exhausting the sand stockpile that they had been pulling from and would be switching over to a new stockpile. They’d run test batches to get the new mix approved in advance of it’s use.

When the mix with the new sand arrived, those of us on-site that day were stunned: The barrier wall concrete was coming out of the slipform machine and it was standing – It wasn’t ripping!

I’m sure you can figure out what happened: Obviously it was the sand.

Who would have thought….

To everyone’s credit in this story, it wasn’t from lack of effort or concern that the installation was such a difficult process: Everyone was struggling with finding a solution. Nobody involved with the project had ever experienced anything like this before.

This was an odd-ball occurrence that had some really smart engineers, contractors, labor crews and materials engineers completely stumped. It got figured out, not by exacting science or by a Ph.D in concrete – It got solved by the happenstance of a sand pile being exhausted….

Who would have ever thought that the shape of sand particles, or a sand’s chemical composition, or its behavior when combined with a certain cement, water & larger aggregates, could have such prominent effects on performance?

How was no one able to figure it out? Hadn’t any of us, up and down the line of engineers, material specialists and contractor reps, experienced something like this before? Isn’t there someone in the chain of command who could unequivocally had figured this out?

If you are a Construction Engineer, you can NEVER call yourself and “Expert.”

Let’s face it: Construction is an extremely dynamic industry. There are so many facets where knowledge is required that to know everything about everything is virtually impossible to achieve.

We all know engineers who are specialists: A geotechnical engineer, for example, can specialize in an aspect of soils-related design or performance, but, he may not have the necessarily time or inclination to understand other facets of construction and/or engineering. We wouldn’t call him to prepare, say, a maintenance of traffic scheme for an expressway improvement. Or we wouldn’t ask him to check the shop drawings for a concrete wall forming system. He may be able to become an “expert” as a soils engineer, but that is because his primary focus, executed over decades of work in this single domain, affords him the opportunity to know and understand the extents of that area of engineering. 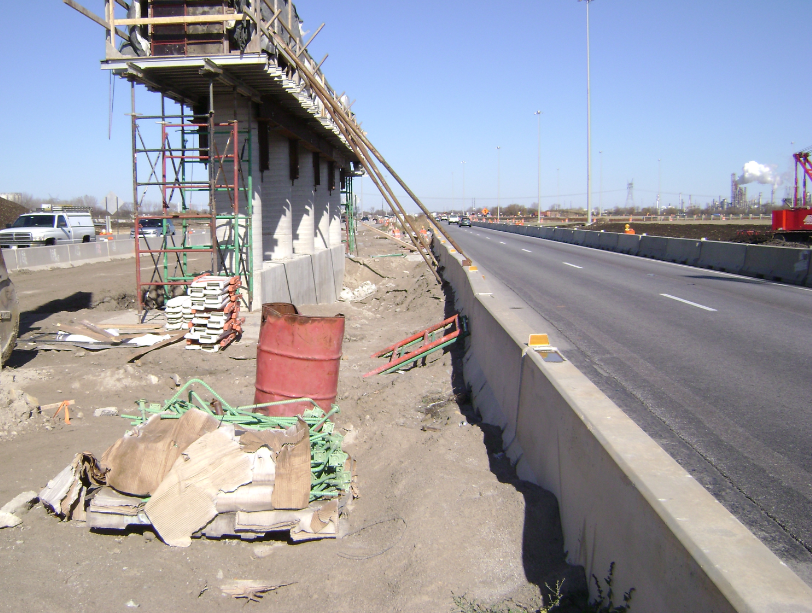 Can a Construction Engineer Become an “Expert?”

In fact, I’ll go one step further: I don’t think I’m and “Expert” in ANYTHING.

And I’m OK with that.

I think the I-55 barrier wall is the perfect example of why it is difficult for those of us in engineering to throw around the word “Expert.” We had some of the most-experienced engineering minds surrounding a problem. There were a couple of people dealing with this issue who get close to being “Experts.” But none of us/them could crack this code.

And while the concrete barrier was falling down, we had dozens of other smaller problems on the project that needed our attention. Problems that maybe we knew the answer to. Others that required us to ask folks with other knowledge-bases to help us with. Some that need us to work as a group to figure out.

Morale of the Story: As Construction Engineers, We ALWAYS Have More to Learn.

You’ll never reach the top of the mountain. You’ll always be working your way up a slope. And after you reach a plateau, there will always be another rock face to scale….

Go back and re-read my article titled Sharpening the Saw.

We must have the Discipline to Learn.

This past week, I made it a point to open my Brain Books where I keep all of my crib sheets. I pulled some old notes out. I did some reading. I found a few online threads of information that I read with my opening cup of morning coffee.

The college degree you received isn’t the end: It’s the beginning.

The professional license that hangs on the wall behind you isn’t a Fast Pass at Disney World to the front of the line: It’s a reminder of the hard work that it took to achieve it, the pride that you felt when you first received it, and a daily reminder of the Discipline required to maintain it.

Make it a point next week of learning a couple new skills. Hit the “Refresh Button” on a couple of subjects you haven’t thought about in a bit. Grab a textbook from your college days and read 2 pages.

Never stop learning. Always maintain a sense of curiosity that drives you to want to crave knowledge.

Get better. Find the discipline to become a better engineer – Everyday – Become 1% better.

When is the last time that you used “Free Body Diagram” in a sentence? You smiled after you read that, right? You were immediately teleported back to a simpler time. Your high school Physics class, […]