HEY, all you young construction professionals – YOU NEED TO HEAR THIS!!!

When it comes to personal attributes, it’s fair to say that we can (and should…) be able to quickly rattle-off a half dozen traits that, we believe, set us apart from others. Maybe it’s good looks, or being able to work with our hands, or having a great disposition, whatever. We all have a few that we are proud of.

Without a doubt, one of my governing values, my personal foundational pillars, something that is on every single goal sheet that I’ve ever written, deals with hard work. I LOVE to work hard.

Nothing gives me more satisfaction than a morning, day & evening working in the trenches. Spending a day in the grinder is my life-spring. I LOVE feeling like, at the end of the day, I got the shyt beat out of me. And if the workday wasn’t enough, getting under a barbell, rolling on a jui jitsu mat or spending time on the ice completes my need for being decimated, ground-up & humbled.

I LOVE to work hard.

I don’t want to be mediocre.

I don’t want to be average.

I want to always be learning. Digging. Finding the answer. Scratching to get to the next checkmark, whatever that might be. And I’m not talking about corporate ladders or chasing more money, like some sort of 1990’s Wall Street movie: That’s not where my personal pursuit of excellence lies. Never has been, never will.

I love to to grind. To sweat. To wake up, get the day rolling and get after it. I don’t want to sit around the water cooler and bullshit, I want to go. That’s how I’m built. That’s how I roll. That’s how I expect myself to perform.

So what happens when I’m thrust into an environment where like minded people aren’t there? Where work ethic doesn’t exist? Where the goal is to just get by, do the minimum, delegate instead of doing the jobs that nobody else wants to do?

The good news is that the vast majority of the people I associate with aren’t weak. They have a spirit of toughness. They are willing to work, maybe not 100% all-out, but they are committed and are willing to get after it when the bell rings.

So I’ll ask it again: What happens when weak shit enters my circle?

Well, I’ll tell you a story.

A while back, I had a conversation with a fella on our jobsite, let’s call him Tom. He seemed like a good guy, well-spoken, well-mannered.

A few of us are on-site one afternoon, all standing in a huddle talking about some up-coming work, and I was introduced to Tom. We noticed that the skies were clouding up a bit.

Now mind you, this is the first time I’ve gotten to talk to this guy. First impressions, right?

So he says “Well I’ll tell you guys something I learned from my boss at (old employer). When it starts raining, get to where it’s dry. Hell, my employer isn’t going to pay me to sit at home if I’m home sick with a cold now, is he?”

Picture me standing still with a glazed-over blank stare on my face.

Now picture me dropping my proverbial microphone and walking off stage…. 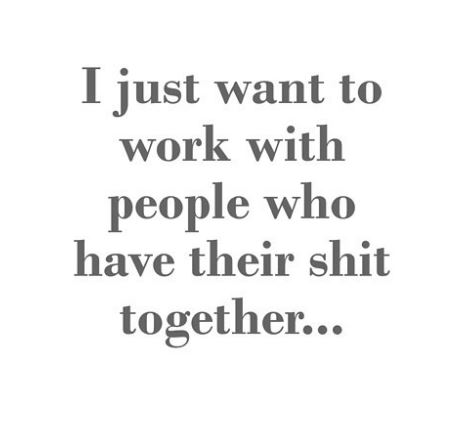 I can’t think of a better way of summing up the way I feel about the people I want around me.

Tom, in an instant, took himself off my draft list. Done. Gone. Finished.

This might sound elitist & arrogant, but I’m going to say it: If you want to go into battle with me, you have to earn my respect. I need to be able to count on you. And you know what – If that makes me sound like an a-hole, well, I don’t really care. I’m getting too old to have to put up with nonsense. That’s what it takes to work with me.

Look, what we do in construction and engineering typically does not put us in life-or-death situations: That’s not the point. And it doesn’t matter if I’m in a leadership role or if I’m just in a supporting position as part of a team. I need to be able to depend on you for the two of us to execute as a functional squad.

Ask yourself this question: Do I want to put any modicum of trust in a person who won’t even work in the rain….?

Weak. Mediocre. Average. Staying Under The Radar. Doing The Minimum. Being In It For Yourself. The “I” Is More Important Than “The Team.”

Done. Out. You’re not built for this club. I Don’t Trust You.

OK, so maybe I’m running hard on Tom. I can hear you: “C’mon, Bob, he’s a nice guy. He’s doing his best out there on-site. You just expect too much.”

How’s this: At this point in my life, it doesn’t matter to me. I heard all I need to hear.

What matters to me is the size of your heart. How much do you care about the team? The success of your teammates? How hard are you willing to work to see that the team succeeds? Why are you here? For yourself? For a paycheck? Or are you hear to get after it to serve the team, serve the client & accomplish the mission?

When you wake up in the morning, when you step across the office threshold, when you get out of your truck on-site, what is driving you? What is your motivation to work and to be part of the construction process? Are you walking around waiting for 3:30pm to roll around? Are you hoping to milk some OT hours out of the job late in the day? Are you avoiding diving into the nitty-gritty of the job details because you might get dragged into having to get your hands dirty? Are you pushing tasks off on your co-workers, just because (fill in the blank with whatever lame excuse you can come up with to NOT do work)?

I’ve got no time for weak shyt. None. Zero.

Here’s the lesson. It’s simple and easy to understand:

You Can NEVER Work Too Hard. Never.

(OK, I really do care about you. I’m not that big of a jerk – You understand my point, right?)

I put #hardworkpays on a lot of my social media posts – I believe it to the core.

Be that guy or gal who gets in early.

Be the person who is asking the questions, doing the research, taking on the mundane & menial tasks.

Be the person who never quits. Who keeps asking for more assignments. Who does the homework. Who studies the plans and specifications. Who is striving, every day, to be a better engineer. Who busts tail no matter if people are watching or not.

Do work. Love work. Have a passion for greatness. Be the hardest working bad ass on your team. Don’t ever let anyone out work you. Prove to your boss, your crew, your client and the industry at-large that you want to have an impact. Let your efforts speak for you.

Don’t be Tom. There are a lot of Tom’s in the world – They are a dime a dozen. They don’t last. The are forced to hop from place to place because people quickly figure out there M.O. Believe me when I say it: Nobody wants Tom’s on their team.

Have your shit together. Bust your ass. Be the hardest worker on your crew. People WILL notice.

As I’ve mentioned in previous posts, I’m a Franklin Planner addict. I’ve been using my planner for over 2 decades and couldn’t function without it. One of the early founders in in the “Personal Organization” […]

Commitment – Am I committed? A lot of times, I find myself in situations where I am at the tip of the spear. Where I’m sitting in a meeting, or standing on a jobsite, and […]

Underground utilities are everywhere. EVERYWHERE!!! They are a vital part of our modern society – But if you’re a Construction Engineer, they are nothing but mines in a a minefield. In my article on Knowing […]